The band was formed in the summer of 2015 by Dennis Jak along with Hans Bijland. After a short search Tim Roeper and Robbert Kok (DISAVOWED, ex OBSIDIAN) were added to the line-up, soon to be followed by Melle Kramer (ex OBSIDIAN). Once the line-up was complete the band immediately started recording their debut EP ‘DAUTHUZ’, which was (self-) released in February 2016. Unfortunately both Robbert and Melle had to leave the band shortly after the release and they were replaced by Manoloxx and Nick de Vet. 2017 Already is an important year in DAUTHUZ history. The band successfully opened for Death Metal icon David Vincent’s I AM MORBID at 013 Tilburg in June and will play their first gig outside of the Netherlands in December. Furthermore, they have started collaborations with a record label WormHoleDeath and a booking agency Doc-Agency. Currently the band have finished recording their first full length album, ‘Destined For Death’, which will be released on November 24th 2017. It will include the track ‘Dying Breed’ with Marloes Voskuil (IZEGRIM) on lead vocals. A promo video of this track was released in January 2017. Apart from the upcoming album DAUTHUZ have a lot more in store for you. Interesting ideas and gigs are in the works, all the more reason to keep an eye out for them.
Discography: -
Dauthuz - EP - 2016
Dying Breed - Digital single - 2017 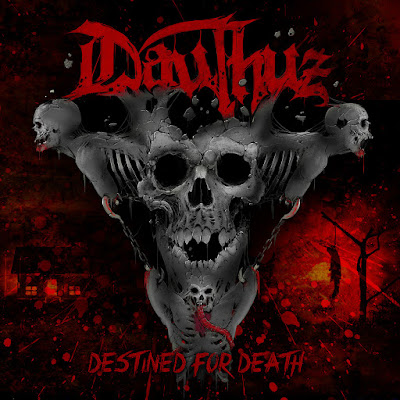 Tracklist 1 Destined For Death 2 The Hunt 3 Dying Breed (Feat. Marloes Voskuil) 4 Made In Blood 5 Honoured To Serve 6 Killing In The Woods 7 Killed In The Woods 8 Tormentor 9 Deep Inside Your Soul 10 Warmaster