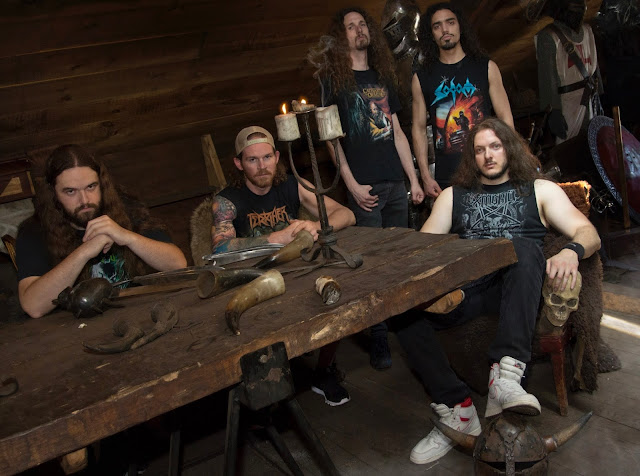 L – R: Ira Lehtovaara (Guitar) | Kevin Withers (Drums) | Brandon Sanders (Bass) | Gabe Rosa (Guitar) | Angelo Bonaccorso (Vocals)
Photo Credit – Wesley Raffan
Death/thrash outfit RAIDER, hailing from Waterloo, Canada unleashed their debut album “Guardian of The Fire” this past March. The eight-track LP is a rush of E-standard mayhem, thrash overtones, and blackened vocals. Lyrically, the album’s theme revolves around overcoming lies and hatred that stand between all of us and the truth.
Continuing to fuel the fire for the full length, the band is sharing with fans their new lyric video for the track "Ravenous Hydra".  Stating the record revolves around the theme of overcoming, for this song, the story of Hercules versus the Hydra is one that stood out and inspired the band to write about it.

The band explains the track and lyrics:

"Sometimes it feels like when we conquer one hardship, two take its place. In spite of this, it's important to keep moving forward. Musically, 'Ravenous Hydra' shows you just how frantic a fight with the beast would be! Dive into the depths of Lerna and experience the brand new lyric video depicting exactly that! This is a reflection of battle - the chorus is relentless head diving to devour you, and the verses provide a small respite until the final head is claimed."

Check out the lyric video for "Ravenous Hydra" HERE.
Fans of bands of Sepultura, Annihilator, and Skeletonwitch, RAIDER is one of the underground death/thrash bands to keep an eye on in 2020.

"Guardian of The Fire'" is available on Bandcamp, Spotify, Apple Music.

Track Listing:
1. Bound By No Fate (5:00)
2. No Sign On The Dawn (6:04)
3. Endless Vengeance (6:16)
4. Guardian of The Fire (6:48)
5. Infernal Justice (6:03)
6. Ravenous Hydra (5:28)
7. Offering of Souls (6:15)
8. Destroyer (5:51)
Album Length: 47:49
For more info:Facebook.com/RaiderMetalInstagram.com/raider.official
EPK
- 30 -
“”Bound By No Fate” itself is an unrelenting and chaotic blast of thrash. Even someone who’s not primarily a fan of the harsher vocal style prevalent within death metal should be able to appreciate and get into the new Raider track and upcoming album.” – Metal Injection
“Raider pillage the best of death and thrash for their own blazing (yet fun) fury on debut LP Guardian of the Fire, out March 20. Despite only forming in 2017, the Waterloo quintet sound export-ready, and not just to nearby markets but even to the far reaches of Europe, from which many of their influences hail.” – Exclaim! 8 Emerging Canadian Artists You Should Hear in March 2020
"I think RAIDER is one of the best of the new breed of bands who are playing this style of metal today and “Guardians of the Fire” is well worth your time." - Metal Temple
"In the end, these eight tracks combine influences from their domestic Canadian roots as well as American finesse and aggression to illustrate the power, precision, and musicianship that keep Raider in league with acts like Annihilator, Exmortus, and Skeletonwitch as far as melodies, hooks, and darkened, savage attacking mechanisms." - Dead Rhetoric
"GUARDIAN OF THE FIRE is a non-stop hell-storm of pummeling death infused thrash. The album is full of technical riffing and some insanely powerful drumming. Raider has enough ability here to deliver up some of the best riffs in the business with a proficiency that many may possess, but rarely offer up to the masses... Fans of Exodus, Lamb Of God, Exmortus, and Deicide, among others, will find that they are going to have another favorite band to slam to!" - Metal Rules
"Canada is doing great in the thrash stakes this year, what with Warning Sign, Lutharö, Annihilator and plenty more all releasing ‘great’ to ‘phenomenal’ albums. Now the relentless machine of Raider has joined the ranks of great Canadian metal in 2020 to utterly punish and pummel the competition. Guardian Of The Fire is as high quality a debut anyone could possibly ask for, and this quintet look set to burn the world – one Ravenous Hydra at a time." - Metal Observer
- July 18, 2020