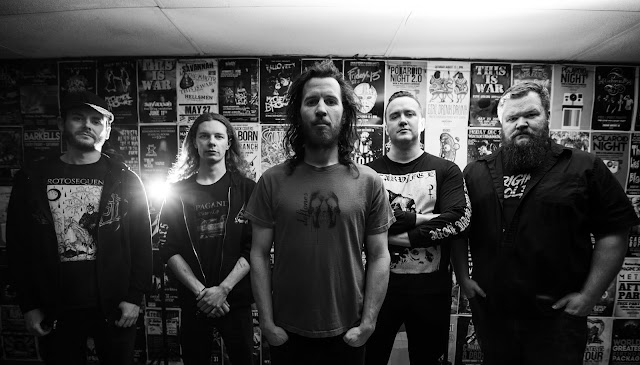 Edmonton’s Omniarch are set to release their debut self-titled album on May 8, 2020. Melodic, technical and relentless, the Canadian act is refining the chaos of death metal and adding intricate technicalities.
The first single off the debut is 'Ohm Cairn', a savage journey of 6-string delights and aggressive melodies. Omniarch has been toiling away on this album and is excited to show off their handiwork to local and international fans. The album is a vastly differing and unique journey through history, mythology, the imagination, and learning through introspection and reflection and the single tells the tale of the Omniarch, his rise to power and omnipotent rule.
They have cast their net wide and expect to entice fans across the metal spectrum, in their own words:
“It is suitable for fans of aggressive, progressive and technical metal music, it is something new, but still within the realms of what we know and love. Our debut album is our full, headlining set, and plays great in the order of the album.”
Any fans of technical and progressive death metal will find comfort in the blasting sounds of Omniarch, especially those who like Revocation, Inferi, and The Black Dahlia Murder.
'Ohm Cairn' is streaming via its premiere on GhostCultMag HERE.


For more info:
Facebook.com/omniarchmetal780 Instagram.com/omniarchmetal
EPK
About:Omniarch was formed from the ashes of two former bands, Netherward and This is War. Morgan Lambert (guitar), Mason Wilson (guitar), Jon Hofmann (bass), Mackenzie LaHaye (vocals), and  Henry Giesbrecht (drums) who had played gigs together in separate bands, had always entertained the idea of joining forces. Eventually, conditions allowed for the amalgamation of the two bands into a new and wholly different alloy of metal and formed the beginning of Omniarch.
Giesbrecht, the original drummer, added a new dynamic to the band with his fresh approach to metal song structures. Eventually, Giesbrecht moved on and made way for Sean Higgins to step in and make his own indelible mark on the band with his nuanced sense of rhythm and pace. The disparate and yet congruous influences have come together to showcase a truly unique and exciting band, full of opportunity.
Each Omniarch song starts with a collaboration between Wilson and Lambert to determine the riffs, which are then brought to the rhythm section where they are morphed into a  cohesive idea that is splattered with aggressive technical death metal vocals with themes surrounding history, fantasy/science fiction, and mythology.
Omniarch is just getting started, as of spring 2020 they have a fresh self-titled release out on May My 8th with plenty more music coming down the pipe. Watch out for them on the live circuit and take your chance to witness a compelling live show that challenges boundaries.