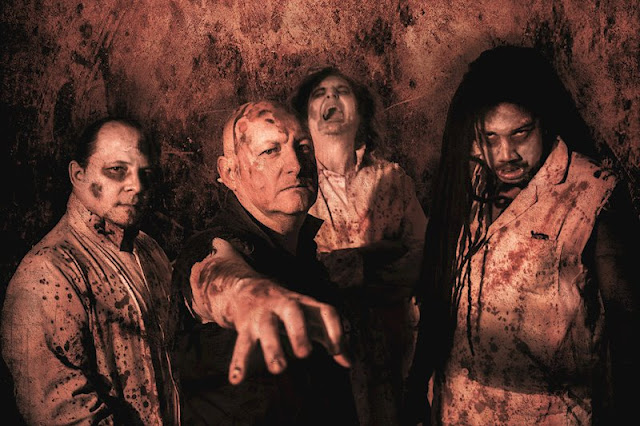 In it since nearly three decades, PUTRID OFFAL has always been a one-of-a-kind band among the gore Death / Grind scene incorporating gregorian chants and keyboards into their swarming mass of infected aural virulency ever since their cult 1991 split with EXULCERATION and, even though it took them 25 years, their successfull 2015 debut, "Mature Necropsy" proved it once more, soon followed by countless gigs and festival appearances (HELLFEST, OBSCENE EXTREME, DEATHFEAST...) and Europe tours with MERCYLESS and INHUME.
But when "Mature Necropsy" is a rewritten re-recording of all of their '90s material, new album "Sicknesses Obsessions" is all new material and that says a lot about the challenge it was for the band writing the successor to an album that's full of well-known neckbreakers and push the envelop even more but the fearless quartet of pathologists had a plan as some of those new songs like "Let There Be Rot" or "Livor Mortis" are already stapples of their setlist ever since they reformed as showcased on the album's "Live at HELLFEST" bonus DVD shot in 2017.
"Sicknesses Obsessions" plunges even deeper in the anatomical inferno demonstrating PUTRID OFFAL's songwriting versatility yet managing to keep it a coherent unit even though incorporates unusual elements for the genre (female vocals...), paying homage to the Hard Rock scene with winks to AC/DC, MOTÖRHEAD, etc. yet chanelling it all to create a reeking symphony of putrefying sickness.
Lyrically, they are obsessed. But not with gore for gore's sake: it's a journey into the history of pathology evoking such historical characters as Andréas VESALIUS, charnel houses, barbers being the first real pathologists because of their cutting skills, etc. not forgetting their fascination for necropsy like the autopsy report opening the album or "Y Shaped", obviously referring to ribcage splitting. If you expected a surgery, be warned, what you're going to face here is a total butchery!
Let There Be Rot! 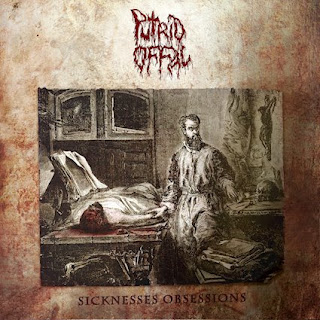