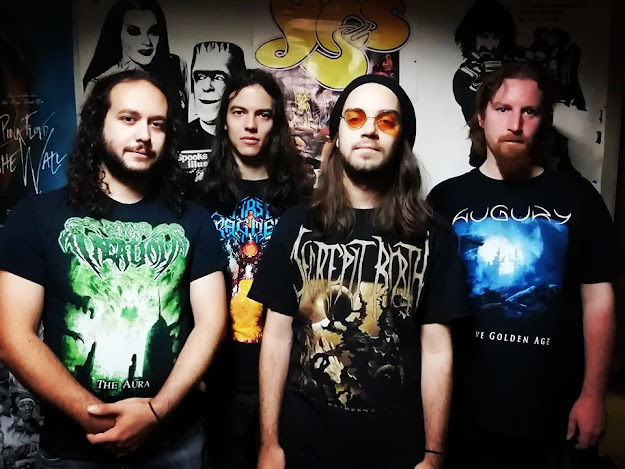 Canada’s Skyless Aeons are unveiling their next single “Dimensional Entrapment” via NoCleanSinging HERE.

The premise of the single is how humans are bound to the limits of their finitude, and the only things that give us comfort and relief are the things that will eventually destroy us. “Dimensional Entrapment” provides some of the most dissonant material the band has written, with subtle nods to Ulcerate and Portal that grows into a powerful melody.

A unique blend of extreme metal styles come forth on the album “Drain the Sun”, which is loosely intended to be a concept album, with a much darker, more focused and tense sound than fans will expect. The title is a metaphor: “the sun” refers to whatever it is that gives us life, light, purpose, structure, or pleasure. In countless forms, humans have a habit of taking something that is good for us and abusing it until it literally destroys us. The band explains this further:

“Even if you’re aware of it happening (and a lot of us are), the machinations of society and the bleak reality of everyday living force us towards the sun in order to cope. Everyone has their sun - that thing that makes life bearable and worth living - and everyone will drain their sun until it cannot provide any more energy, collapses in on us and we are sent hurtling into the abyss. This album is our artistic interpretation of both where we’re at and a terrible warning of what we’re headed towards.”

Around 2014, guitarist Nicholas Luck and drummer Martin Burchill met as a result of an errant bus ride in London, Canada. At this time, Burchill was looking for a stable project after drumming in various rock/punk/metal bands over the last decade or so, and Luck, only 18 at the time, was looking to start a death metal band.

Vocalist Nathan Ferreira and bassist Steve Oliva followed shortly after and with a scathing collective disdain for the larger structures of society and a commitment to constant evolution in sound and ethos the band recorded and released the “Era of Famine” EP in 2016.

The band has already gained a reputation through local shows as one of the more unique and energetic death metal bands in the scene, opening up for artists such as Ashbringer, The Convalescence, Nesseria, and Killitorous – a wide variety of styles, yet somehow, Skyless Aeons shares musical similarities with all of them.

At a live show, one can expect certain synchronicity and chemistry that can only come from years of experience and practice feeding off of each other’s ideas. Couple that with vocalist Ferreira’s on-stage recklessness mixed with unusually sardonic and self-deprecating stage banter, and it’s no surprise that Skyless Aeons are gaining notoriety and drawing more and more people to their local performances as of late.

2020 brings a new album “Drain the Sun”; it takes a different approach, using much heavier and expansive riffing textures and shows refining and maturation of the band’s identity. It can best be described as “; progressive death metal” with some dissonant, doom-influenced leanings.

“This debut EP by Skyless Aeons is monstrous. 35-minutes and four sweeping songs worth of intense songs blackened-death: riffs aplenty, interesting transitions, and solos smothered by a lead-heavy old-school sounding production. The vocals are inhuman and loud in the mix fluctuating from mid-to-high range shrieks similar to Anaal Nathrakh to mid-range growls. There are moments of real technical efficiency – think Gorguts and Mithras – along with an atmospheric undertone akin to Ulcerate and Flourishing. I highly recommend it.” – Akerblogger

“There’s a rich diversity to Skyless Aeons’ music, even though their material is cohesive and doesn’t feel the need to go into extra clean, girlfriend metal territories to get the point across. The four tracks (all between seven to eleven minutes) are progressive affairs without too much fluff. The guitars of Nicholas Luck alternate between early 90s tremolos, a modern dissonant approach to black metal and a healthy dose of melancholic Nordic melodic death metal and he plays everything well.”  – Metantoine’s Magickal Realm